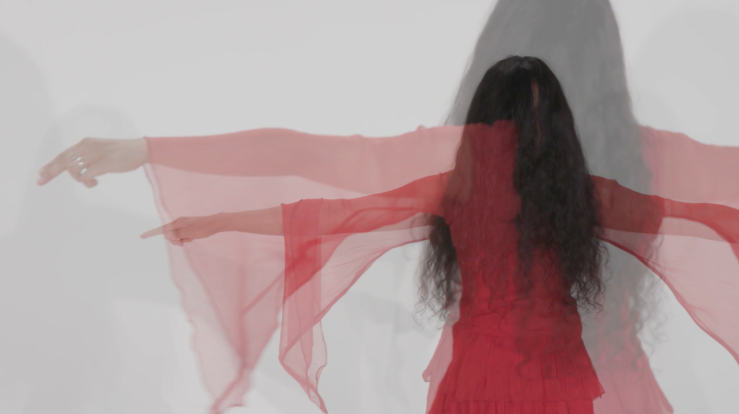 Drawing a space within a space with two kinds of different energies; one is with hand movements & gestures and the other one is by making sound on certain frequencies using the sounds Aa, U, M collectively sound as Aum.  Aum is, as mentioned, made of three sounds indicating the concept of existence associated with each sound; Aa – The Creator, U – The Preserver and M- The Destructor. The circular motion is to project energy lines in all directions and create another meditative space and the state of mind to take the audience into another world of experiences, where there are no thoughts, where there is total peace, the one which is a zero space. The zero space means – we are physically in the space yet mentally we forget everything except for what is happening in front of us. The energy and this mesmerizing sound actually become a vehicle for the transition of one mental state into another, which is seen, felt yet unseen & not felt.

The silence in between the two sounds is as important as the sound itself because those are the moments when one enjoys being in the space and be at peace without waiting and expecting the next sound.

The movement of the circular motion in the video has no ending or a climax. It’s a constant meditative state where one wouldn’t like to come out from! It’s the retreat of the Self. The ambience created in the video is a drawn space with energy which makes one forget the physical presence of body and mind by identically just being in that meditative state of mind and which also could be sleep inducing in some cases.

I appear wearing red with my hair on my face. I spread my arms both sides making a gesture similar to the Cross with fingers folded in a way to be ready to throw energy lines through them by releasing energy in the air like laser which is invisible to the eyes but can be felt. I slowly spin my body in a circular motion along with creating sound using my throat and maintaining the gesture of hands but slowly moving hands up and down with occasional unplanned stillness.